I’ll have reviews for each in the coming days, in addition to guest blogger Timberwolf’s take on the Mesh Weaver and the Paradox (to be published tonight).

The anniversary event in Star Trek Online has been evolving over the years from a short-time event lasting a few days, to the month-long extravaganza we see today.  And as the events have increased in complexity, so have the various rewards that have come with them.

Starting in 2012 with the 2nd Anniversary, STO has offered a new ship as a reward for participating in the event.  The ‘Anniversary Ship’ as it’s become known, is usually tied to a specific story-line, or as an opportunity to introduce a new class or type of ship to the Star Trek Online universe.  By 2014 and the 4th Anniversary Star Trek Online expanded the method to earn the ship from running a single mission, to a mission you run multiple times for multiple rewards.

As of the 6th Anniversary, a new reward token will be released for each new ship to prevent players from ‘stocking up’ for the following year.  Anyone who has started the event process to earn the ship will have an opportunity to finish it during the next anniversary event, or they can purchase tokens from the lobi store to earn the reward faster.  Vouchers earned can also be turned in for reputation marks.

Stylistically the ship draws elements from the Annorax Science Dreadnought and the Krenim Imperium Warship.

I had a tough time finding a ‘sexy’ profile of the ship for the blog.  While not exactly ugly, she evokes a design you would more likely see in a Thunderbirds TV episode or in a Buck Rogers serial.  Now if only I could get a Captain Proton costume in the game, my immersion would be complete.

It’s base turn rate of 10 makes it slower than other Federation science ships (T5 Vesta, T6 Scryer) but it makes up for that sluggishness with an increased hull strength and the best shield modifier of any ship in the game at 1.47.

Consoles and a new ‘flavor’ of Chroniton Torpedo

The ship comes with the universal Timeline Stabilizer Console, and as part of the reward for initially claiming the ship, you also get the the Krenim Chroniton Torpedo Launcher – itself part of the 4pc Chronometric Calculations (weapons) Set. 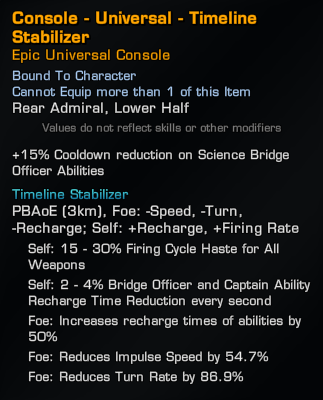 At first glance the console offers a passive CD reduction for Science Bridge officer abilities, and when activated it provides a firing cycle haste for your ship while it slows down your target.

My initial tests found it to be a ‘nice-to-have’ and not necessarily something I would go out of my way to add to a build for non-science captains.

The Krenim Chroniton Torpedo differs from the the traditional Chroniton Torpedoes by initially having a lower chance to proc (25% instead of 33%), but having an additional proc of bypassing 100% of your targets shields. The proc chance improves to 50% when the full 4pc Chronometric Calculations set is used.

The 100% shield ignore is ridiculously nice, and took most of us by surprise.  My initial tests were ‘so-so’ – the occasional breech of the shields increasing the speed in which I dropped targets, but without any increase in DPS.  It will be several weeks before we can test the full set and see how a 50% proc rate will impact our builds.  What I will say is that I have 3 polaron-based science captains ready to test it on.

Until then my current favorite torpedo set is the Quantum Phase set.

The Krenim Science Ship comes with the following Ability Package: 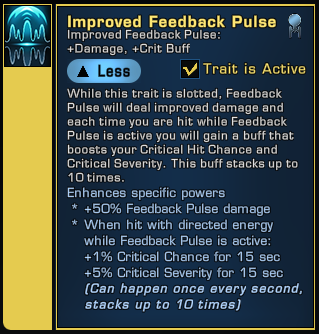 I’ve always considered feedback pulse something more apropos for PVP builds as NPCs don’t necessarily deal the kind of damage to warrant using feedback pulse in an STF or episode.  After watching the following video from DPS after Dark’s Teacher Kirby I’m in the process of reconsidering that belief.

Thanks to Teacher Kirby for permission to add this here.  Check out her Youtube channel DPS after Dark for other great advice.  I’ve also added her channel to my list of resources.

Science heavy (as expected) the bridge officer seating offers a fair amount of flexibility with the universal lieutenant seat.  In this case my build went for the additional tactical support, but it could easily be used to provide more engineering abilities.  Even with the tactical focus I found the ship very survivable.

I pugged my way through leveling the ship and had little difficulty breaking 22K.  As an average pilot, I had no difficulty with this ship. 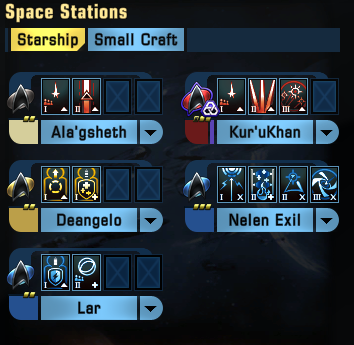 Even though my build is really not supportive of feedback pulse, I’ve added it just to try out the new ship trait.  So far I have to say I like it, and it’s something I’m going to work towards with at least one of my science alts.   Need to increase my threat generation, use Reciprocity etc.   Hmmm… it could be a nice addition for an AgroTank build 😉

Lets Look at my Build 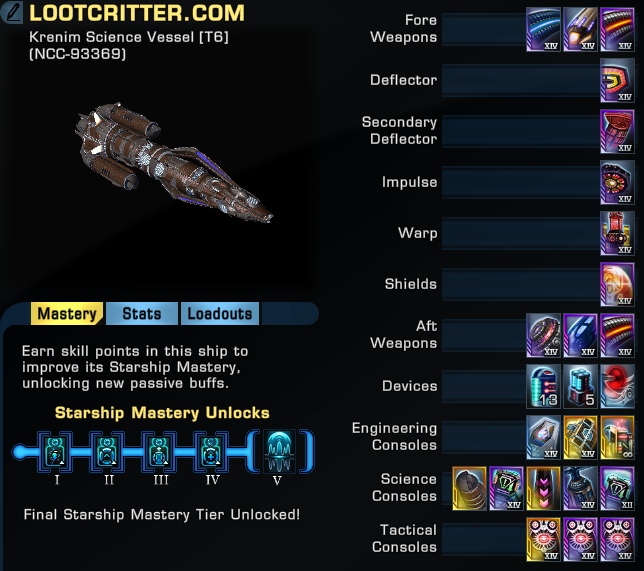 Breaking my own rule of mixing energy types, I built this out as phaser based to take advantage of the Quantum Phase set.  Although the Krenim torp is in the fore position in this picture, I swapped its position to aft as I still find the Quantum Phase torpedo to be much more effective.

A way I like to measure for myself the success or failure of any build is how quickly I can down a cluster of Borg Spheres in your typical Red Alert.  This build – even with it’s mixed weapon energy types – had little difficulty.  In fact I was a little surprised at how quickly my shields recovered even against the Borg.

As free ships go, this is a worthy addition to your admiralty collection.  For the Romulan and KDF factions – until we get the new flagships – this is likely the only new science ships you will have access to.

I’ve been having fun leveling these ships, and I’m looking forward to using the ship trait on science-specific builds.  The real question is how will the Chronometic Calculations set benefit my science polaron drain and feedback builds over the next several weeks as the components become available.

2 thoughts on “First Impressions: Hands on with the 6th Ann. Krenim Science Ship”