I promised a review back in January, but it sat in my ‘ToDo’ file because every time I looked at it, the review kept getting longer.  With six different releases, this ship has a complex back history spanning almost 4 years.

So here we go @Zoberraz -sorry for the wait 😉

The Advanced Escort – or MVA Escort was introduced in the Voyager episode Message in a Bottle (S04E14) where the Voyager crew sends the Doctor through the Hirogen-controlled ancient communications network back to the Federation, only for the Doctor to find himself on an experimental starship stolen by Romulan Operatives. Working with the ships newer model EMH (played by Andy Dick), the Doctor helps defeat the Romulans while using the ships unique ‘Multi-Vector Assault Mode’. It was a decent comedic effort, but was an even cooler geek moment with the ships new capabilities. Definitely a highlight of Voyager S04.

The Prometheus itself was an experimental craft, and the second tactical ship designed for deep space tactical assignments. As this was the prototype it came fully loaded with regenerative shields, ablative armor and the multi-vector assault mode which allowed the Prometheus to break in to three separate ships. It also contained one of the most advanced science labs in the fleet at that time. Designed by Star Trek: Voyager senior illustrator Rick Sternbach, the model was exclusively CGI and made appearances at the Battle of Procyon V in Enterprise Azati Prime (S03E18) and in Voyager End Game (S07E25).

The ship was an early favorite in Star Trek Online when it was introduced several years ago. Slightly heavier in hull and featuring a standard 4/3 weapons layout, the advanced escort was a common sight in Star Trek Online back when escorts ruled the skies. The Advanced Escort was one of the first Z(C)-Store ships I purchased in-game, and ultimately one of the first Fleet variants I added to my collection.

The original had three design variants – Prometheus (based on the Voyager appearance) and two additional styles Cerberus & Phoenix classes. A fourth skin was initially introduced as a C-Store option, but was later redacted and added back as an exclusive option for the Fleet variant Hephaestus class.

What stands out as unusual is that this ship has no less than six variants released throughout the history of Star Trek Online:

While the T5 MVAE served me well for the better part of a year on a variety of Federation captains, the console really didn’t add anything of value to my builds.  While you could choose which of the three craft you could use, the remaining 2 ships were incredibly under-powered, offering little if anything in terms of support.

Opinion: The breaking of the T5 MVAE  into Alpha (α), Beta (β) and Gamma (γ) sections was at best a cosmetic option. The original intention in Voyager was that each of the sections were a fully capable starship, but the reality in Star Trek Online was they were less effective than hangar pets and at best provided acted as meat-shields for your efforts. Had these pets come with a larger weapons array, or had each element had some sort of special ability (extend shields, heals) they might have proven to be more effective.

Given the drive to break the 10K DPS barrier (imagine that, a time when DPS was something only escorts could seriously deal out), the MVAE console was quickly cast aside in favor of anything and everything. Without the burden of these pets, the MVAE was a very respectable damage dealer. What made it more valuable in my eyes was it’s Lt.Commander science in addition to the tac heavy seating. I love a good gravity well, followed by an Alpha strike with Dual Heavy Cannons and a spread of Omega Torpedoes.

When the T6 Hestia was added to the Game, the design team had the opportunity to revisit the original design and bring it closer to screen cannon. The revised Prometheus was updated by Thomas Marrone, while the new T6 Version was modeled by by Hector Ortiz and Keenan Daufelt . Both models have interchangeable parts allowing players to experiment with a variety of looks and styling.

The design of the Hestia is in line with new styling seen on the Command ships.  I particularly liked the nacelle variations between the top and bottom pylons.  For a ship with such a low profile, it’s a nice step forward in Federation design.  Add to this new design all the previous elements and its hard not to see players sinking many hours into space barbie variations.

While I played with numerous mixes of nacelles, pylons and primary hulls I found myself gravitating to the ‘off-the-shelf’ Hestia design.  While the other skins have merit, and I am a fan of the classic Prometheus styling – the Hestia is one sexy ship. 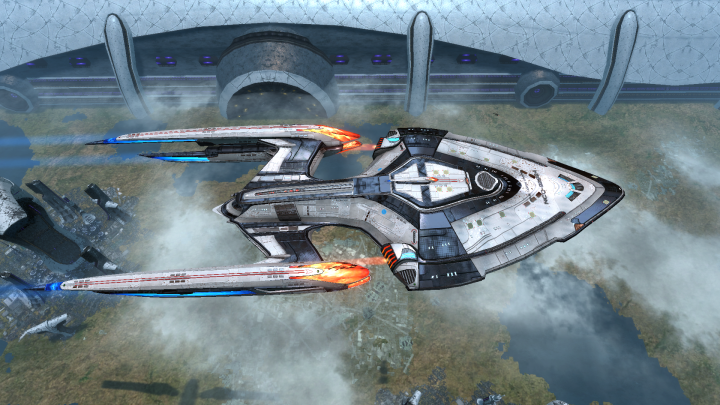 A  new console was added and a 2-pc set bonus was created for the Advanced Escort Modification set.  For the purposes of this review, I used both consoles on the T6 Hestia to get a sense of whether or not the consoles added much to the ships abilities.

A  new console was added and a 2-pc set bonus was created for the Advanced Escort Modification set.  For the purposes of this review, I used both consoles on the T6 Hestia to get a sense of whether or not the consoles added much to the ships abilities.

While my experience with the MVA Module console was less than inspiring, the new console had an odd line under the Firebringer ability – “Applies to Vector Components” meaning the Firebringer effect is generated by each of the modules (alpha, beta and gamma) active.   In simple English – instead of a single 5 km sphere of (affecting up to 5 foes within), you now get up to three.

Note that the damage values listed below are based on my weapons power set to 100% (125/100) on an Antiproton build.  The tooltip (of course) reads differently:

The Firebringer effect lasts for for 10 seconds,  and has a 2 minute CD. Targets within the sphere potentially receive 12K worth of plasma damage with 100% shield penetration.

Over the course of a few days I attempted to find ways to use the consoles to take advantage of both consoles at the same time.  The energy choice of the build did not impact the damage produced by the console. Having three ships effectively deploy the Firebringer effect however was potentially very cool.  Unfortunately my original opinion of the MVAE console stands unchallenged, meaning without the ability (or AI) to have them move to a certain position to deploy, the effect was more random luck than anything else.  Once again the effect is so situationally effective – it’s not worth having on your build.

During my second round of testing I looked at the secondary effect of the console – the Firebringer Flare.  Instant AOE damage based on….?  Torpedo hits?  Yes.  Energy Weapons?  Maybe (although I’m not sure). I could not get consistent results with the flare.  If I waited for the 2 min CD I could with reasonable assurance get that effect on torpedoes and torpedo spreads although it only worked once per target (rather than all torpedoes in a spread having the effect).  In truth I received more value from an embassy plasma console.

I’m beginning to wish that with each new weapon or piece of gear there was somewhere I could go to 1.) see it in action, and 2.) test it out to see that it’s working on my build.  Having to dig through a third party parse is a little ridiculous.  If after buying something I can’t readily figure out how to use it on it’s own, it’s a non-starter for most players.

The Hestia comes with the standard four escort unlocks at 1-4:

The ship mastery is Numerical Superiority.

On the surface this Ship Mastery has a lot of potential, especially for those who have purchase the earlier MVAE.  While I am not entirely sure I ever saw a 50% bonus to attack, I did see significant improvements in my damage in close quarters.  In CCA specifically it was clear that the bonus was working, while on my own in a pop-up encounter or in a Red Alert the increase was negligible when I used the MVAE console to add two allies to the mix.

I tried a number of seating options for both cannon and beam builds (this was prior to the range changes in 11.5) and prefered a beam build for overall effectiveness.  I’m certainly going to revisit cannons now that their range modifiers have been equalized with beams.  The BOFF seating includes a Lt.Commander engineering/command hybrid seat.  Normally I’d not spend much time with Command abilities but I found that between my piloting skills and the ships 41K base hull I was fairly resilient enough to drop hull heals for command abilities.

And my favourite part of any ship – the Lt. Commander Science seat.  That gets a +1 star from me on any day. 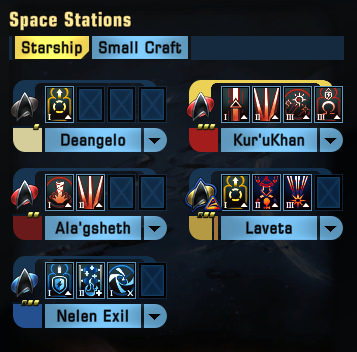 I started out with the a AP dual beam build.  There was a time when beam’scorts were considered an abomination but as the power creep keeps growing with each release, I can’t help but use it.  Go with what is effective for you.  I had little difficulty breaking 25K DPS

And then Season 11.5 rolled around.

Normally when I used cannons in the past year I found myself to be about 70% as effective as I would have with beams.  There were certainly situations when cannons could be better in terms of spike damage, and I most definitely believe in the hands of the right pilot (or me practicing) I could have equalled the beam damage rate.

A quick test yesterday and I eclipsed 30K with little to no effort.   Cannons are back!

The T6 Hestia is an above average escort that not only looks great, but with the revised cannon range bonuses is proving to be a serious damage dealer.  For the Voyager fan (heck, any Star Trek fan) it’s a worthy addition to your collection.  But if you are fan of using escorts, I’d be hard pressed to recommend this ship over any of the Pilot ships available.  They are significantly more fun with more variation in terms of layout and capability.

On it’s own the HEPE console is a nice-to-have, but as it’s so situational I would likely drop it from any long term builds.  And don’t get me started on just how bad the pets are for the value of the MVAE console.  When the HEPE and MVAE consoles work with pets, and lady luck smiles upon you, the effect is glorious.  But getting that to happen is entirely luck based – my skill as a pilot did not impact the outcome. I will say that playing with them together was not only challenging to use effectively but more often than not it was frustrating.  And my ship doesn’t need to be frustrating 😉

IF the pets were stronger (more weapons, better AI) and we had carrier-like commands to make them work, this would be an entirely different conversation.