Normally we don’t get player versions of an opponent ships until later in that season, or not until after the current story arc runs it’s course. Anecdotally it seems like we’re getting them sooner each season. The Na’Kuhl are a temporal adversary after all, so in theory at least they could have shown up at any time 😉

My first impressions with the Na’khul ships were ‘cool’– unique, alien-looking, and definitely something space-vampire-nazis might use. While I wasn’t a fan of the battlecruisers nose, the color schemes and the shape of the raider were very cool. I’m no stranger to leaked ship models and layouts, and to be perfectly honest nothing about the consoles or ship masteries stood out as being something I really wanted. But damn, the raider was sexy. One part ninja, one part Batplane – the Tadaari Raider was something I’d like to have especially now as cannons have been given new viability with the skills revamp.  The raider’s extreme banking in concert with the placement of the impulse engines were specifically designed to highlight the crafts sharp, knife-like turns.  Wow.

If there was one ability I was interested in seeing work from a player’s perspective, it was whatever that annoying red shield and duplicate distortion combo was. Unlike the temporal duplicates (Manheim Device) or even the Multi Vector Assault console ships – at least visually it appears the distortions are true duplicates of your build instead of the reduced layouts and default weapons.  They even have the ability to use special consoles like the Plasma Wave and the Plasma Discharge Array if equipped. Niiice!

What caught most of us by surprise was in the release of the actual stats a few days before the lockbox dropped. Integral battlecloak on all three, and not one of the usual sources had figured that out. Well played devs, well played. Suddenly these ships didn’t just look good, they started to look great.

Out of the gate my intention was to look for the science vessel. While I was less interested in putting it on a Federation character (no real advantage to the using cloak), it most certainly had a place with my Romulan and KDF Science captains. As it was a lobi ship I thought I would buy one for my Romulan. 250 keys later there was no joy on the lockbox ships (apparently I didn’t perform the correct sacrifice to the RNG Gods), I did have enough Lobi to purchase the Daemosh. 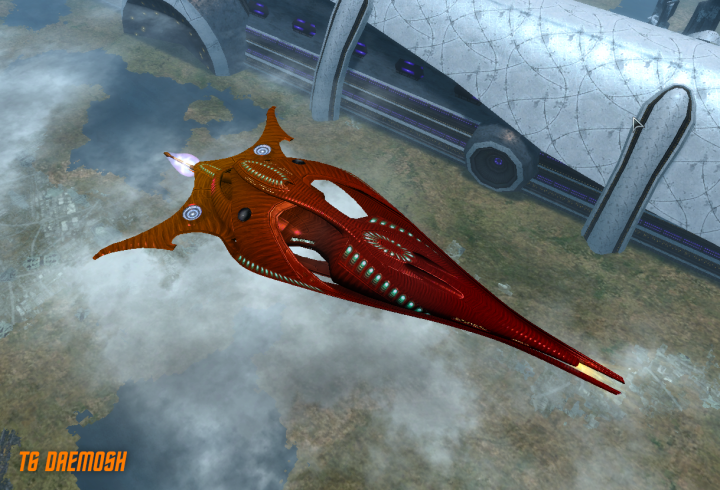 Full Disclosure: My impression of this ship is definitely skewed by a number of factors. The new skill system has improved my science characters dramatically, even more so since I have not RESPEC’d their original flawed builds. Secondly it’s the kind of science ship we’ve been begging STO to make for KDF and Romulan factions for years. And thirdly – the variety of space barbie skins against this stunning red ship. The ship itself has no real physical modifications, but the hull textures on it’s unusual color scheme made for a some serious Space Barbie

The Daemosh (and it’s fleet-mates) were designed by Hector Otiz (@@sandman979) and have a very distinctive look. One key element is the unique external propulsion system. Without visible warp coils or bussard collectors, the look of the ship reminds me of a thrusting dagger (cinquedea), with a christmas light for a hilt. At first the rear propulsion didn’t really click with me, but it seemed right for the multi-layered hull design. In any case the ship feels like it could perform an unpowered landing like the space shuttle.

The next thing that stands out is the unique engine sound this design employs.  I have it on good authority that the sound design was to be reminiscent of a WWII bomber (not the drone of the buzz bombs).  It is certainly distinctive in its sci-fi take on german-made aircraft engines. It can be a little overwhelming in sector space making me wish we could selectively lower the volume on just that feature.  Don’t believe me?  Take a listen:

A Rather Unique Bridge

As the bridge is part of the first missions, it’s been made available as part of the release of the player ship.  Essentially one massive room with four large ante chambers, this bridge is one part megalomaniac command center, and one part vampire bordello 😉  It’s easily the largest bridge set available on a Lobi ship, and if I were a few decades younger – one hell of a place to throw an after-party.   Add a DJ at the command seat, chill rooms at the top,  coat room at the bottom, and a VIP room – you’d have space for 100+ partiers.  My only thought is that barking commands at the top your lungs might not work with the size.  It’s almost too big 😉 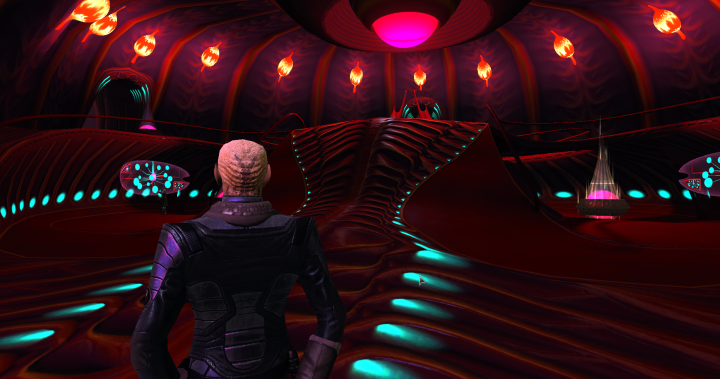 The Daemosh comes the Temporal Distress Beacon – a very useful immunity & duplicate generator.  Technically it will generate the distortion leaving you with an immunity shell for 30 seconds.  It has a passive benefit as well increasing your shields by 15% and increasing your CrtH by 12%.  In actual usage, the shell lasts only as long the distortion remains alive and you are vulnerable to a subnuc from a science-based opponent.  My experience with the shell is that’s it’s versatile, and if timed well both you and your distortion are immune to area blasts like the Crystalline Entities discharge.

For the purposes of this review, I included 2 other decent Nakul consoles.  From the Raider I added the Plasma Discharge Array a universal console with a passive 25% Plasma Energy Damage bonus, and a 1% critical chance bonus.  The active ability is a fairly nasty heavy plasma cone.  Extremely short range it reminds me of a sawed-off shotgun blast.  What really stands out is that this console uses charges in a similar fashion as the  Omega Torpedo launcher.  In this case the weapon carries 2 active charges that can be used as long as you have available energy.  It does appear to benefit from other plasma consoles and I’ve seen spike damage break 80K at close range.  A nice 1-2 punch with the next console.

This added an additional set of passives as set bonuses, boosting plasma damage for torpedoes and energy weapons by an additional 15%, PLUS a 10% recharge time reduction for Intel Tactical and Pilot bridge officer abilities.

The third console comes from the Na’kuhl lockbox – the universal (any ship) Plasma Wave Console. This console is borderline OP and it comes with the added accidental bonus of activating your Scimitars Thalaron Winglets. 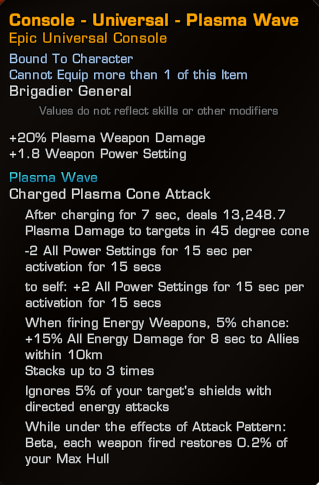 The best description is that it’s more powerful than the 3-console set bonus of the Thalaron and only uses a single slot.  Passives add 20% to all plasma damage (projectile and energy) and adds a +1.8 to your weapon settings.  In combination with the Temporal Distress Beacon console – you sit immune while you build up a devastating attack.  It’s not for every build, but if you fly a slower ship that throws out gravity wells and you use plasma – this console is a must-have.

Depending on my build the tractor beam was adding anywhere from 6-12K damage per use.  It was substantial enough that I changed my playstyle to make better use of it.  The new skills systems and console adjustment have in my opinion made Science builds the most fun to use.

The Daemosh offers a wide range of seating options.  In fact during my testing of this absolutely wonderful science ship, I tried no less than six separate builds and had little difficult breaking 28K DPS with all of them.

A Lt. Commander Intel Tac, a Lt. Pilot/Engineering seat, Commander science, and two universal seats – one Lt. Commander and one ensign is strangely flexible, and it’s making me very curious about the ships yet to come in this expansion. 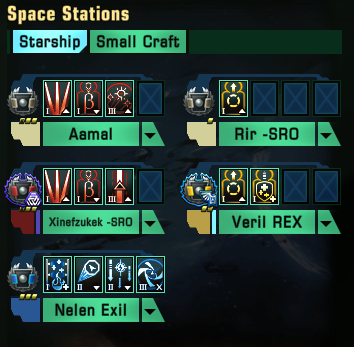 I probably could write another 5000 words covering all the variations I tested.  Beams? Hell yes.  Cannons? No problem.  Drain builds?  Feedback Pulse?  Easy-peasy. I settled on two more classic builds – a Romulan Plasma array build and a Klingon (and Coalition/Terran) Disrupter build primarily to burn through the Crystalline event.

While fighting the Na’Kuhl the plasma build seemed to melt through them without a second thought, while for ISA and Borg Red Alerts the disrupters seemed to worked better.  It all depends on your opponent, but I had little difficulty breaking 28K without stressing out about my positioning or teammates. 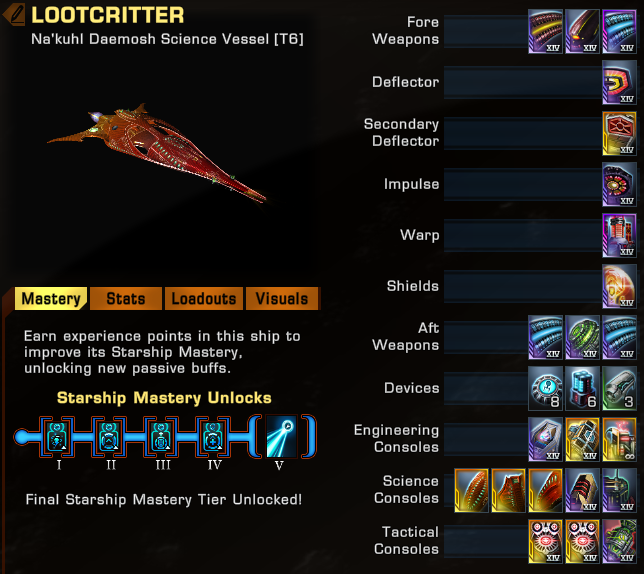 I’ve put more hours in the Daemosh than any other this season.  They would easily be a perfect 5/5 if one was hiding under a Raptors Wing, and the other in some form of a KDF D7 variant.  These are the ships the KDF and Romulans have needed for a while.  They lose a half point in the rating for being factionless (yeah, that’s being picky and no ship is perfect), and half a point for the sound effects.  This is by far the best Lobi ship currently offered in the game if you prefer a science based ship, and it’s the first lobi ship that I have bought twice.  No buyers remorse from me.

If you’re thinking of trying something similar – go romulan plasma, and you won’t be disappointed.

Lastly – while I missed out on the Battlecruiser (and I’m ok with that) I really, REALLY want the dreadnought now.

Next up tomorrow: 2 Reviews of the Vorgon Xyfius Heavy Escort