Update(s):  1. The builds I post used to contain some sort of disclaimer recommending you don’t take my builds seriously.  I’ll add that back.  My builds are for fun, and I strongly recommend you check out the builds advice on r/stobuilds for whatever you’re looking for 😉 2. In the original text I said the Annorax was obtainable from the Infinity Box, which I’m now told it wasn’t.  Text removed until I can verify either way.

Where do I begin?

From the day Star Trek Online entered into beta, the one unrequited request was when will we ever get a T5 (and then T6) version of our favorite starship, the TOS Enterprise?

The question came up so often in conversations and interviews with the developers, that the ship – or lack of a ship – developed it’s own mythical status in the game.

The Urban Myth was that CBS did not want to see a T5 version of the ship. There is some truth to the rumor. One could argue that it was whoever was in charge of the game back then simply decided it didn’t fit into the goals of the game. While the design was beloved by the fans worldwide, it just didn’t seem practical in today’s meta.

Or, they were saving it for today 😉

A lot has changed since the games release. CBS’s relationship with Cryptic Studios has grown, and what Star Trek Online can do next is anyone’s guess. In a conversation I had with STO’s executive producer Stephen Ricossa during STLV50, Stephen was very open about the status of the license, and the longevity he see’s for one of the industries most unique IPs. While our conversation was off the record, as a fan, and as a player, I came away extremely happy. More on what I learned from meeting the devs in my next post.

Ok – there are plenty of ships available in Star Trek Online that look sorta like, that are themed like, or as in the case of the Kelvin-verse, a close proximity of the actual Enterprise. Regardless of when you joined Trek fandom, deep down we all wanted to see an end game version of the Connie.

There is only one Enterprise. She was a living character.

With the expansion of the license, Star Trek Online added the Kelvin-verse as part of the overall STO Universe. For many of us, we saw this as the last chance to actually get an end-game version of the Enterprise, that resembled what we’ve been clamoring for since the games launch. While STO never claimed it would be ‘the only T6 Enterprise’, many of us assumed that this was going to be it. Leaked images of the Connie skin on the JJprise, and alternate nacelle coloring further suggested that this was going to be as close to our dream ship as possible. Add to this fanboy speculation about all of the cool new TOS-themed ships – well – I was convinced we’d never see a T6 Connie.

One cannot help but feel the timing of the most-requested ship in the history of the game was designed for maximum financial impact. Kelvin lockboxes were extremely successful for STO – likely the most popular promotion released to date. I suspect that’s about to change.

Released along with a TOS Klingon D7 and T’Liss Warbird as part of a limited-time R&D Pack Promotion, lucky winners would find themselves with a universal box that when opened by a player of a particular faction, they would be graced with the appropriate ship. This change in how a ship is rewarded is the best improvement to the lockbox/ R&D Pack lottery to date. The Kelvin Lockbox could have benefited from this. 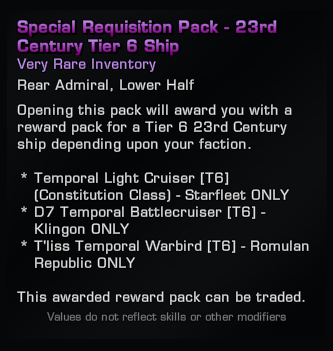 Side note: I think the Klingon and Romulan ships from the last 2 promotions SHOULD REALLY BE Lobi ships – even at a reasonable price increase.

I like R&D Promotions.  I’ve had better luck with them, and I buy them periodically for Research boosts.

When I got mine on the 26th R&D box opened, I was flooded with offers to buy her. Within an hour, prices on the exchange maxed out at 750 million, and they were selling as fast as people posted them. The drop rate for me was very similar to the Annorax and many of the ship collectors I play with all reported they had no difficulty in acquiring them without paying EC. I suspect that while this promotion is up for the next 30 days, prices will likely subside before the next Infinity box.

The only downside, and it needs to be addressed, is that these are faction ships that are not account-wide.  They could be account-wide, and still be a rich source of income.

The Temporal Light Cruiser uses the same model that was recently updated for Agents of Yesterday but does not come with the TOS bridge. The default bridge is the 31st Century Universal. If you already own the TOS bridge, you can apply it in the tailor.

The great news is that yes, space Barbie is strong with this ship, with access to the Refit, Excalibur, Exeter and Vesper styles if you already own them.  A couple of minor issues though – the default Constitution style isn’t available in the drop-down although you can select the parts individually, the ships registry is modern (although this will be fixed shortly), and a few Hull textures are missing. Some players have gotten the name bug, but this can be reset fairly easily by visiting the ship tailor again.

You can swap the saucers, pylons, nacelles, necks and engineering hulls with relative ease. My favorite is a small change to the original Connie by adding the refit neck for some torpedo tube goodness. 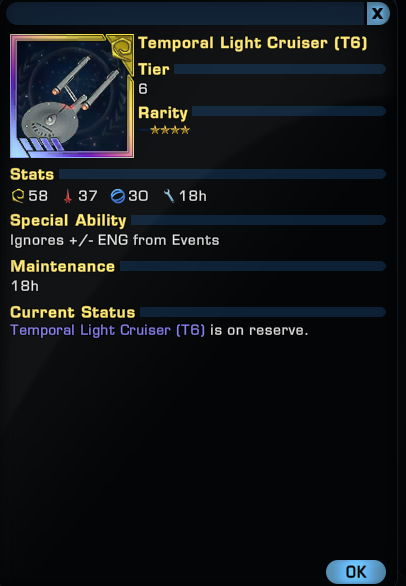 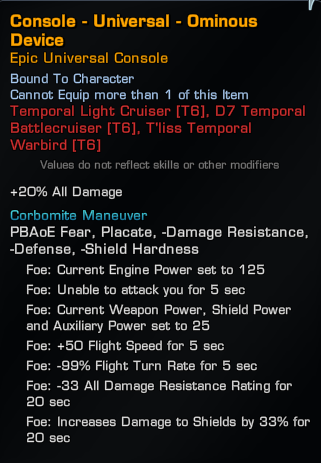 The consoles icon is a nice rendering of the Fesarius’s scout craft from the original TOS episode. In the simplest of terms, it enables you to get away from opponents while giving yourself a small series of buffs while debuffing your opponent(s). I found it handy in the new Mirror Incursion event, but I get the distinct impression it’s a console I could live without. Many talk about it as a PVP console, and I’ll leave it to that community to decide it’s value. I chose to drop mine for the Broadside Emitter Arrays console because I like to make things go boom.

Seating seems basic, but it has the same number of powers as the Kelvin timeline ships (Intel Dreadnought & Heavy Command Cruiser). The biggest difference is a Lt.C Hybrid Command/universal seat, and the Commander Engineering/Temporal Hybrid seat. From my perspective, this is the best possible layout placing Temporal powers front and center, while giving me the most flexibility for build choices.

This Enterprise – my Enterprise – can be anything I want it to be. And Yes, I’ll eventually have all of these seats filled with TOS Holoboffs.

The ship comes with TOS-themed weapons and it includes TOS dual beams which I thought replaced by the dual array.  Apparently, I was wrong. The drawback is they don’t upgrade, and while I’d love to use them, the differences between XIV and X are too wide to consider using Mk X.

But I would if I could. Hint Hint. cough New R&D School cough

The ships turn rate easily allows for the standard DPS AP dual beam build – which I started out with for my first runs. While the ship does support single cannons, this is the Enterprise.  I’m old fashioned – so just as I don’t wear white after labor day, my Enterprise doesn’t use cannons. So after a few runs, I went back to my tried and true arrays, with torps front and back. 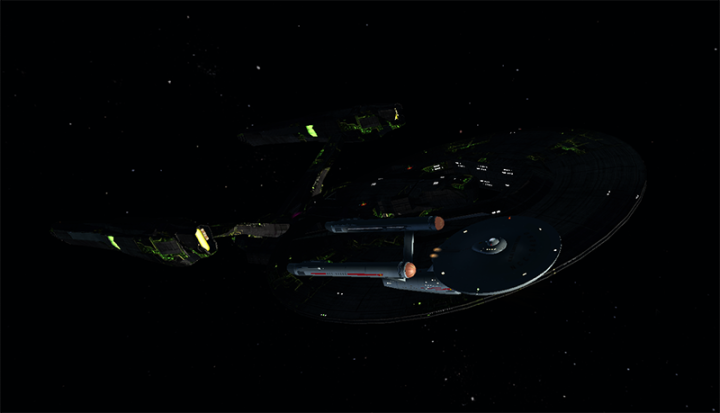 The real truth is that builds can be almost anything today and still work well in the game. I had little difficulty matching performance numbers with more established builds. In fact, I’d go as far as saying this ship performs better that my Vengeance.

The seating is awesome, 5/3 weapons layout and it’s centered around temporal abilities.  It has a LtC Science seat.

And it’s the freaking Enterprise.

I am very satisfied 😉

It would have been 6/5 if it had the TOS bridge 😉 But that’s nitpicking and other than it’s availability (more on exclusivity later in another blog post) I could not be happier.

Star Trek Online has effectively rewritten the book on how they sell ships. The methodology on the Kelvin box – regardless of its success  – was hideous. Want a KDF D4x? Open the boxes on a KDF toon, or buy it from the exchange.  At least with the current R&D promotion you can choose which toon gets to open the ultimate prize. I hope they keep that format moving forward not just for ships, but for consoles as well.  The infinity Lockboxes work well that way.

Another concern is the focus on the Federation, and I will agree that it is a Fed-based game, and the players overwhelmingly prefer it that way. So maybe we cut the Reds and Greens some slack. Offer these reward ships as Lobi options instead. I guarantee you’ll get more players playing Red if they know they can get a D7 easier than the Connie.

Where do we go from here?

The once forbidden end-game Connie is in my hands now. Does that mean playable Borg, also a no-go, may be possible? Or maybe the slow step-by-step quiet update of Cardassian assets means we’ll see a Cardassian expansion next?  Mirror T6 Connies?  T7? I’m just guessing here.

Star Trek Online managed to pull off a number of surprises with this release.  I’m excited to see what’s up their sleeve to top this 😉

8 thoughts on “First Impressions: Hands on with the T6 Connie – Temporal Light Cruiser 5/5”